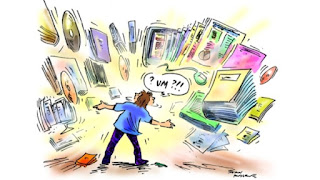 These digital days the deluge metaphor is widely used to describe the sense of information overload that many of us feel. According to Twitter Blogs (2013) more than 500 million tweets are sent each day. Fincham (2011) quotes TechFortune that more than 30 billion pieces of information travel across Facebook each month.

Avalanche, deluge, tsunami the imagery seems inadequate especially as every new digital user (soon every child born in the Western world?) is adding to what we once called the data “stream”. Today it is less of a ripple, and more Niagara and Victoria falls combined.

The impact of so much seemingly unrelated data is a sense of fragmentation. An isolated tweet can be meaningless. In simple terms context is lost. What to do? Burt Herman had the idea of Storify. As Fincham suggests:

If social media is killing context, Storify can help journalists and students put it back together again.

The founders of Storify say the tool/platform lets you pick out the most important pieces, amplify them and give them context, in other words, a form of curation. As Fincham says: “Students have the whole world to sort through.” Maybe Storify offers a way of making some kind of raft the better to navigate the daily digital storm.

An example follows which could be used for reporting, and for a number of teaching contexts within Journalism schools, film studies, Arts and Humanities, where students are asked to look beyond the glitz of the initial data bytes, and go deeper contextually, and maybe reveal something permanent in the seemingly ephemeral world of digital sound bursts.

How the Human Animal Collaborates

How the Human Animal Collaborates
Posted by Unknown at 06:22 No comments:

Game of Death and Life
Posted by Unknown at 13:15 No comments:

Game of Death and Life

Game of Death and Life
Posted by Unknown at 13:04 No comments:

The Virtual in Reality

Virtually Real
Posted by Unknown at 04:11 No comments:

Listen to the Landscape

Listen to the Landscape
Posted by Unknown at 13:24 No comments: